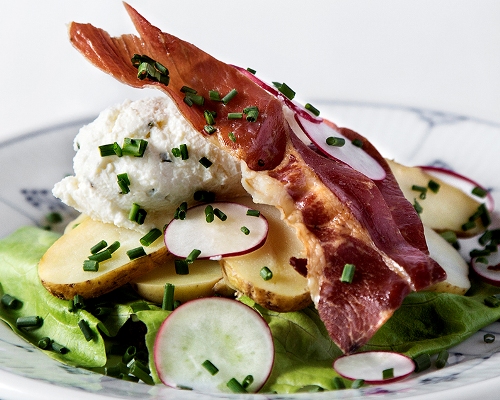 The juicy new Danish potatoes are complimented by oven-baked ham and crème of smoked cheese when our Head Chef, Jimmi Bengtsson, re-interpret the Danes’ summer favourite: the open potato sandwich. We invite you to find the recipe below.

Every spring we experiment with new tasty versions of the classic Danish favourite: the open potato sandwich.
Here we oven-bake the smoked ham to give a great crunchy, slightly salty, contrast to the juicy new Danish potatoes and the creamy smoked cheese.
Find the recipe below – or enjoy (one of) the Danes’ favourite sandwich at a cosy lunch at Restaurant Kronborg.

Boil the potatoes till tender. Leave to cool and slice.
Bake the ham in the oven for 10-15 minutes at 200 degrees, until crisp.
Mix the smoked cheese with the sour cream, add salt and pepper to taste.
Butter the bread and layer the sliced potatoes on top.
Arrange the crème of smoked cheese and the oven-baked ham on top of the potatoes.
Garnish with chives and radishes.